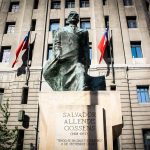 1. How did you come to focus on twentieth-century Chile as an area of research?

I would say that what led me to focus on twentieth-century Chile was a mix of personal interests, research opportunities, and structural constraints. I was born and raised in Chile, where I also did my undergraduate studies. My personal interests were—and, to a certain extent, still are—linked to political issues. As a left-leaning eighteen-year-old, I was obviously interested in my country’s own history, especially in its twentieth-century history. But I must confess that I was even more interested in ancient Mesopotamia when I chose history as a career and that during my first years as an undergraduate student I became fascinated by early modern and modern European history. Unfortunately, the difficulties of doing research on those areas ended up discouraging me. And, when I was in my third year, I began visiting and conducting research in Chile’s libraries and archives, which helped redirect and channel my impetus. By the time I finished my licenciatura, I was already too much of a “Chileanist” to even think about focusing on ancient Mesopotamia or modern Europe. I decided to do a PhD in the United States to expand my horizons and become a Latin Americanist. I think I managed to become one, although I have been on a strange path since I obtained the degree and came back to my home country: doing research on twentieth-century Chile, keeping an eye on the broader Latin American field, and occasionally indulging in the pleasure (and challenge) of teaching about modern Europe and the United States.

2. What new insights into the Allende regime are gained by focusing on radio?

I think it helps us recast the scope of politics and to probe the trope of politicization at the same time. The idea of the Allende administration as a highly politicized era in Chilean history has a long genealogy, but it has been challenged recently, from several yet disparate perspectives (political scientists examining public opinion polls, cultural historians studying the interests of the youth, etc.), perhaps rightly so. I would argue that by looking at the period through the lens of radio we can have a better understanding both of the political elites’ attempts to garner support among the masses and of the masses’ heterogenous interests. Radio was truly a mass media, much more so than newspapers or magazines, which have received a great deal of attention. The Left, which had a strong publishing tradition yet a meager knowledge of radio, seems to have understood this. During the Allende administration it invested time, money, and energy into radio, all the while distrusting the medium. Allende and the leaders of the Left knew that they could not lead Chile toward socialism if they did not have a powerful radio presence, even though they had a lot of trouble finding their radio voice. It should be no surprise that one of the military’s first actions was to bomb the Left’s radio infrastructure and establish control over the airwaves.

3. What archival challenges, if any, did you face in researching an ephemeral medium such as radio? How did you confront these challenges?

It is always difficult to do historical research on radio. To make matters worse, most of the radio stations controlled by the Left were attacked on the day of the coup, and the people in charge of those stations seem to have been more interested in burning than in saving records. The survival of Allende’s famous last radio speech is in itself a remarkable feat, which has led to bitter discussions among left-wing radio workers claiming credit for it.

I was not originally interested in the Allende administration’s radio policy or in left-wing radio programs. I was searching for records of media companies (especially newspapers) owned by the parties of the Left, in the context of a broader project on the economic underpinnings of the Left’s publishing history. I began to find a lot of records of radio companies expropriated by the Pinochet dictatorship, and I realized that I was on to something: Allende and the parties of the Left had bought a huge number of radio stations between 1971 and 1973. By the time I decided to write something on radio I had already amassed a lot of information about these transactions, but I knew little about the kind of programs that these stations aired or about the administration’s overall radio policy. I then turned to parliamentary debates, public opinion polls, communication studies, memoirs, and, especially, print media—the irony! I gathered a significant amount of data through print media: critiques and advertisements of radio programs, denunciation of government control and use of the airwaves, etc. Still, I do regret not finding more audio records or a good set of transcripts.

4. What legacy, if any, did the communication strategies discussed in this article have in contemporary Chile?

I would advise against overstating these legacies. Except for the Communist Party, which still makes an effort to propagate its message through newspapers and owns a radio station in Santiago, the Left has not done enough to fund and run alternative mass media. There have been some promising initiatives, but few of them have survived for long. Needless to say, these initiatives are costly, and the rewards are not immediately visible. Unfortunately, this leaves us Chileans with a media landscape that is far from diverse, dominated by media conglomerates that lean to the right, and quite markedly so. Given the current lack of diversity, it would be wise to think about these issues more thoroughly and come up with solutions to help fund independent outlets, whether magazines or radio stations. A self-respecting democracy should embrace public debate and encourage a diverse public sphere.

One of the ironies of the story I tell (albeit in passing) is that Allende himself vetoed a bill that would have helped fund radio stations through a specific tax, in part because he was already funding the stations of the Left through state advertisement and in part because he feared that such a law would subsidize opposition stations.

What a great question. My partner is tired of me hijacking her “How was your day, honey?” into a discussion of what I have been reading. I wish someone would ask me that question at least once a week.

This week, I would say that I really enjoyed coming upon a special issue, from a few years ago, on global capitalism and communications in the Journal of Global History (vol. 10, issue 2). I read it because of my growing interest in communications, but several of the pieces will also help me improve a course on the long nineteenth century I have been teaching during the spring semesters (in the Southern Hemisphere), especially the classes devoted to industrialization and globalization, which are not my forte.

If you ask me to redirect my attention to the field of Latin American history, I would say that, in the last month or so, I really enjoyed reading a couple of articles on mass media in revolutionary Cuba, one of them authored by Jennifer Lambe (“The Medium Is the Message”) and the other one by Renata Keller (“The Revolution Will Be Teletyped”).

Finally, and as a sort of disclaimer, only a few months ago I found out that César Albornoz had published a fantastic book chapter on TV during the Allende years (“La experiencia televisiva en el tiempo de la Unidad Popular”) that goes in the same direction as my piece and that I encourage everyone to read alongside it.