Interview with Joshua Frens-String, author of “Communists, Commissars, and Consumers: The Politics of Food on the Chilean Road to Socialism” 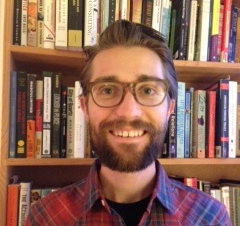 Joshua Frens-String is an assistant professor in the Department of History at the University of Texas at Austin. He is currently writing a history of food, consumption, and revolution in twentieth-century Chile. You can read his new article “Communists, Commissars, and Consumers: The Politics of Food on the Chilean Road to Socialism” in HAHR 98.3.

1. How did you come to focus on Chile as an area of research?

My first real introduction to Chile and the Popular Unity revolution was as an undergraduate Latin American Studies major at the University of Michigan. During my senior year, in a class with the late Fernando Coronil, we read Peter Winn’s classic Weavers of Revolution. I got immediately hooked on this period of Chilean history (while also imagining that all history could be written as beautifully as Winn’s book). Upon graduation, I moved to Washington, DC, where my interest in Chile grew. I interned at the Institute for Policy Studies, where Chilean diplomat and exile Orlando Letelier was working when he was killed by agents of Augusto Pinochet in 1976. Later, I also worked as a research assistant for Peter Kornbluh’s Chile Documentation Project at the National Security Archive. When I entered graduate school, I explored various topics for my dissertation research, but I kept returning to Chile.

2. How did you decide on food as a way into the vibrant and contentious period of Salvador Allende’s presidency? How does studying food politics change our understanding of the Popular Unity government?

I found food to be an interesting lens into the UP era for a couple of reasons. First, some of my initial research suggested that food policy and food politics were critical to how workers and pobladores (urban poor) in Chile understood the idea of economic democracy throughout much of the mid-twentieth century. State intervention to promote domestic food production, regulate food distribution and exchange, subsidize local food sales that adhered to fixed prices for basic goods—time and again these were the sorts of policies that helped to channel urban popular sectors toward socialist ideas and movements, something that few scholars had explored before in looking at twentieth-century Chile.

Second, a focus on food alters the traditional periodization of the UP revolution. As I started conducting research in Chile, I wanted to find a way to pull the UP period out of the sometimes-narrow framework of the global Cold War, reconnecting the era to the long arc of popular front–style organizing in the country, going back to the pre–Cold War decades. Focusing on food and the politics of consumption allowed me to do this. One concrete example I often point to in this respect is the decree that Salvador Allende used to create the Social Property Area of the national economy in the early 1970s. It turns out that that decree, known at DL-520, was first issued in 1932 to create arguably the hemisphere’s first permanent price control office—an agency that would be tasked with setting price ceilings for basic foodstuffs. In other words, Chile’s embrace of socialist planning in the early 1970s seemed as much, if not more, about revitalizing economic ideas from the 1920s and 1930s than it was about anything happening in the Soviet Union or even Cuba.

3. What surprised you most as you researched this article? Did you find anything particularly unexpected as you delved into the sources for the piece?

I think the thing that surprised me most is just how pervasive the problem of inflation was throughout twentieth-century Chilean history. For those who study the UP revolution and the subsequent Pinochet dictatorship, the issue of hyperinflation is typically presented as unique to the Allende era—a symbol of the government’s “misguided” economic policies. However, if we look further back—to the 1910s, 1920s, 1930s—the sorts of economic challenges that emerge in the UP’s last year or year and a half seem less of an anomaly. One thing I try to emphasize in my current research is how few problems were more regularly debated and discussed by local social movements, labor, and the state than the problem of rising consumer prices, especially as it related to food. There’s no doubt that inflation and scarcity contributed to the downfall of Allende’s revolutionary project in the 1970s, but we shouldn’t forget the fact that the UP government received so much support early on because it promised—and for a short time fulfilled—popular sectors’ long-standing desire for a more just and equitable consumer marketplace.

4. It is hard to read about the unique political experiments of the Popular Unity period without being aware of the violent ending to come in the coup orchestrated by Augusto Pinochet. Did this pose any particular challenge to researching this material, and if so, how did you deal with it?

The specter of the Pinochet dictatorship looms large whenever you’re writing about the 1970s. Most histories of the UP period end up seeking to explain the 1973 coup in one way or another, and my HAHR article is no exception. However, one thing I try to show is that socialism in Allende’s Chile and neoliberalism in Pinochet’s Chile share a common (albeit unlikely) origin: the persistent popular demand for affordable and abundant consumption. In fact, there’s a strong case to be made that before the consumer marketplace became a site for constructing an alternative neoliberal order in Chile, food production, distribution, and exchange were arenas in which the Left—from the Communist Party to the Revolutionary Left Movement (MIR)—sought to both imagine and build a socialist alternative. The histories of socialist democracy and neoliberal dictatorship in Chile need to be understood in relation to one another.

Yes! For those who want to learn more about the Popular Unity years, I would highly recommend historian Marian Schlotterbeck’s new book Beyond the Vanguard (University of California Press, 2018). It’s the best thing out there on the making of Chile’s Revolutionary Left Movement (MIR) and its relationship to Allende’s government. I look forward to assigning the book in a course I teach on revolution in modern Latin America.