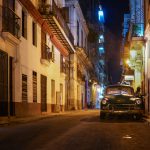 September 30, 2020
by Sean Mannion
Comments Off on Interview with Jesse Horst, author of “Erasing Las Yaguas: Shantytown Networks and Social Reform in the Cuban Revolution, 1944–1963”

Jesse Horst works for Sarah Lawrence College as director of Sarah Lawrence in Cuba, the longest consecutively running US academic exchange program in Havana. He earned his PhD in Latin American history from the University of Pittsburgh in 2016 and END_OF_DOCUMENT_TOKEN_TO_BE_REPLACED