Interview with Ana María Silva Campo, author of “Through the Gate of the Media Luna: Slavery and the Geographies of Legal Status in Colonial Cartagena de Indias” 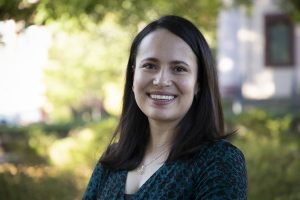 Ana María Silva Campo is a historian of race, gender, and the law in colonial Latin America. She is a Carolina Postdoctoral Fellow at the University of North Carolina at Chapel Hill. She earned her PhD in history at the University of Michigan and holds a BA in history and romance languages from the Universidad de los Andes in Bogotá, Colombia. You can read her article “Through the Gate of the Media Luna: Slavery and the Geographies of Legal Status in Colonial Cartagena de Indias” in HAHR 100.3.

1. How did you come to focus on colonial Cartagena de Indias as an area of research?

My initial research interests focused on cartography and urban history. My readings about urban history and cartography led me to Cartagena and the history of its fortifications, which date back to the sixteenth century. I was able to find a lot of information on this subject, especially because the city’s port, fortresses, and group of monuments are on UNESCO’s World Heritage List. The main justification for conservation funding is the preservation of Spanish military architecture, with no mention of the enslaved laborers who built those structures. I became interested in researching the urban history of free and enslaved people in Cartagena and their relationships to spaces such as the gate of the Media Luna. In fact, the actual gate no longer exists, but the bridge and the fortifications that surrounded the gate it are still there.

2. What challenges, if any, did you face in researching the stories of these cimarrrones, subjects who were intentionally attempting to avoid detection? How did you deal with these challenges?

I had initially envisioned this project as an inquiry into maroon geographies. What territories were part of the everyday life of palenque residents and their descendants? How did they experience a sense of home in the hinterlands, however fragile? However, the documents that have survived about people who fled slavery in Cartagena and its hinterlands were created by enslavers and colonial authorities, largely in the form of reports of military campaigns against maroon communities. From those records, it is very difficult to know exactly where palenques were located, or even what they looked like.

It was similarly difficult to find echoes of the perceptions of residents of the hinterlands about the spaces they inhabited. What I had were the declarations of the palenque residents who were interrogated and sometimes a scribe’s dry descriptions of the date and place of someone’s capture. This material included references to places, forests, rivers, mountains. I collected this geographic data in a simple spreadsheet, and I was very surprised to see that one of the places that came up frequently in the captives’ declarations and the scribal notes was this place called the Media Luna. Then I found the Media Luna on seventeenth- and eighteenth-century maps, and I realized that it was a place in Cartagena, not in the forests. This mapping methodology opened up a whole new way to interpret the significance of this particular urban space in the itineraries of runaways from slavery and their descendants.

This case reflects what scholars of early modern Iberian empires have described as multicentric monarchies. This scholarship has emphasized the importance of local dynamics of governance in a context in which communication with the metropole was an ocean away. Colonial officials sometimes wrote about this, expressing that the king was too far away to actually know what a given situation was like on the ground. In the specific case of the 1691 freedom decree, local authorities argued against enforcement by portraying residents of the Sierras de María as criminals and instigators of an impending slave uprising in Cartagena city.

4. You recount in detail a trial meant to establish ownership over residents of palenques who were captured. How did these trials influence the law surrounding slavery throughout the Americas?

This particular trial shows how putative owners created legal arguments to prove that captured palenque residents had previous ties to slavery in Cartagena. Those arguments were based on very thin or impossible-to-prove evidence. This case resonates with a growing body of scholarship that is revealing the inner workings of New World slavery as a set of relations of force and coercion draped in the appearance of law. The adjudication of the case relied on and reinforced associations between Black people and “slave” status. Like in most slave societies, extensive evidence was required for a Black person to procure legal recognition of freedom, but far less evidence was required for putative owners to assert generational claims of ownership in Black people who had lived their entire lives as free.