Interview with Rajeshwari Dutt, author of “Loyal Subjects at Empire’s Edge: Hispanics in the Vision of a Belizean Colonial Nation, 1882–1898” 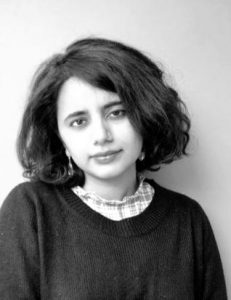 Rajeshwari Dutt is an assistant professor of history at the Indian Institute of Technology Mandi. She researches the histories of Yucatán, Belize, and the Mosquito Shore in the nineteenth century. Her first monograph, Maya Caciques in Early National Yucatán (University of Oklahoma Press, 2017), examined the Maya indigenous cacique as an evolving political figure in nineteenth-century Yucatán. You can read her article “Loyal Subjects at Empire’s Edge: Hispanics in the Vision of a Belizean Colonial Nation, 1882–1898” in HAHR 99.1.

1. How did you come to focus on Belize as an area of research?

In my dissertation and later my first monograph (Maya Caciques in Early National Yucatán, University of Oklahoma Press, 2017), I explored the figure of the Maya cacique in the early national period. While researching my chapter on caciques in Yucatán in the Caste War period, I became intrigued by the seemingly mass exodus of Yucatecans to Belize in the aftermath of the war. Belize changed dramatically as a result of the Caste War: its population increased almost tenfold in a matter of a couple of decades and the settlement became a crown colony. Yet, for something of such consequence there seemed to be no sustained scholarly effort in the form of articles or monographs (except for an unpublished thesis by Angel Cal) to understand the effect of Yucatan’s Caste War in Belize. When I first visited Belize in 2014, I realized that the legacies of this transnational history were still palpable to this day. The fact that I was able to locate rich archival material in Belize, Yucatán, and Britain made the project not only intellectually exciting but also feasible.

2. Belize seems to be generally understudied by Latin Americanists. If you agree with this premise, what does the case of Belize contribute to the broader field of Latin American history?

I believe studying Belize as a frontier and borderland opens possibilities of understanding overlapping imperial/national spheres in nineteenth-century Latin America. My work argues for a deeper and more sustained examination of the intersection between British imperial history and Latin American history. There is a historiographical tendency in Latin American studies to exclude Belize from treatments of Latin America. As borders become increasingly salient in our current political and social climate, I strongly believe that as Latin Americanists we need to respond by systematically rethinking the narrative and spatial framework of the discipline, acknowledging connections with regions that may not share the same historical context and trajectory as traditional “Latin” American nations. Studying regions like Belize enables us to have this conversation.

3. At the center of your article is the trial of a prominent Hispanic, Manuel Jesús Castillo, in 1882, whose guilt or innocence seems ultimately indeterminate, given irregularities in the trial. How did you approach this ambiguity in the sources?

I think as historians our job is to embrace ambiguities and highlight contradictions in our sources and put it out there for the reader. Being able to communicate the muddy, barefooted process of wading into the clutter of sources is important. My philosophy has always been to invite the reader to walk beside me and see historical sources as they really are—messy and complicated. I think such an approach allows us to get a much more real feel for a historical moment rather than arranging everything in a neat pile.

4. Much of your article treats actions on the borderland between Belize and Mexico. Did researching such cross-border interactions pose particular challenges, in terms of sources or otherwise?

One problem I faced was figuring out who the people were who seemed to be moving in and out of the borderland. While movement of people in the frontier was not a new thing, the Caste War caused a superimposition of a new complexity to human and material interchange in the borderland. The categories that the colonial government used to comprehend the post–Caste War multiethnic population in the frontier such as “Indian,” “Maya,” or “Spaniard” were not referents of ground-level reality. In fact, many colonial sources repeatedly complained about the incursion of “Maya raiders” though a closer examination of documents reveals the presence of mestizos, Creoles, and even blacks in the raiding party. Added to the complexity was that at the lowest rung mestizos shared many of the cultural traits and appearances of poor Mayas. Since many of my sources were Colonial Office documents, this necessitated a rigorous exercise of reading “against the grain.”

5. Your article compellingly discusses the evolution of a colonial language and theme of loyalty in Belize during the late nineteenth century. How does this discourse fit within a broader history of nationalism in Belize?

I think the challenge for Belize—and indeed, many multiethnic nations in Latin America—is the problem of unity. The case of Belize in the late nineteenth century serves to illuminate how homogenizing nationalist projects are often built around simplifying complex ethnic and cultural heterogeneities into easily categorizable (but flawed) labels. The question of racial mixing continues to be ill understood by these governments.

I recently finished Kay Dian Kriz’s book Slavery, Sugar, and the Culture of Refinement, which examines the visual culture of empire in the West Indies. I am finding more and more that visual culture and art history can be a powerful vehicle for eliciting nuances in imperialism that traditional document-based archival work may not adequately permit.