Interview with Natalia Milanesio, author of “Sex and Democracy: The Meanings of the Destape in Postdictatorial Argentina” 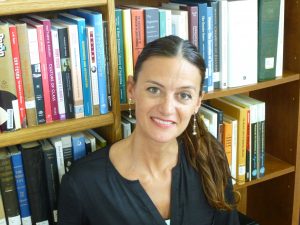 Natalia Milanesio is associate professor of history at the University of Houston. Her book Workers Go Shopping in Argentina: The Rise of Popular Consumer Culture (University of New Mexico Press, 2013) explores the exceptional cultural, political, and social role of low-income consumers in Peronist Argentina. Her next book project is a history of sexuality in 1980s Argentina that examines the transformation of sexual ideologies and sexual practices that took place with the return to democracy. You can read her article “Sex and Democracy: The Meanings of the Destape in Postdictatorial Argentina” in HAHR 99.1.

1. In researching the postdictatorship cultural phenomenon that was the destape, you discuss events that are only thirty-five years past. Did writing such a history of the recent past pose any particular challenges or benefits, in terms of sources or otherwise?

In terms of sources, the most important benefit of doing historia reciente was that I was able to conduct oral interviews. This is only slightly evident in the article, but in the broader project and the upcoming book, Destape: Sex, Democracy, and Freedom in Postdictatorial Argentina (University of Pittsburgh Press, 2019), interviews with, for example, sexologists, journalists, and writers were an important tool to understand the destape in particular and the period more generally. Given the multilayered approach to studying the destape, this project gave me a great opportunity to meet an incredibly diverse group of talented people, like the writer and cartoon artist Maitena or one of the most important sexologists in the country, María Luisa Lerer, and learn a lot about different subjects.

To my surprise, the biggest challenge was finding some essential published sources. I am used to meticulous, patient, and reconstructive research that requires a “patchwork” approach because my first book was about consumer culture during Peronism (Workers Go Shopping in Argentina: The Rise of Consumer Culture, University of New Mexico Press, 2013). Without previous experience working on the 1980s, I thought that finding materials from this period would be easier—more sources and more availability. Yet, quite naively, I had not taken into consideration the nature of some of my materials: destape, porn, and erotic magazines, soft-porn movies, and statistics connected to sex-related products are not generally housed in institutional archives or libraries. Film and media historian Eric Schaefer is right when he calls adult films “the loneliest orphans,” referring to the difficulties faced by these materials in finding a home in the archives. This is true for magazines, images, novels, and other cultural products that were once considered second-rate or disreputable and thus hidden or discarded. So finding these materials and reconstructing collections forced me to contact private collectors and to painstakingly gather materials by reaching to antiquarians and visiting flea markets and building my own personal archives. A lot of work, but fun and creative at the end.

2. In discussing the explosion of discourse surrounding sex as Argentina’s dictatorship ended, you allude to a similar destape in Spain in the wake of the Francisco Franco dictatorship. In what ways was Argentina’s destape part of a broader pattern of postauthoritarian cultures around the world, and in what ways was the destape uniquely Argentine?

The Argentine and the Spanish destape had a close connection fundamentally because many artists, writers, film directors, and journalists who left Argentina during the dictatorship experienced the Spanish destape firsthand while living in the country. When these people came back from exile to Argentina after 1983, they brought some “lessons” of the Spanish destape with them. Yet, the Argentine destape was more complex than this because it received a myriad of international influences and was part of a transnational discussion about sex that exceeded Spain, evident in foreign erotic films and magazines distributed in the country or the fact that the Institute for Advanced Study of Human Sexuality in San Francisco became a center for the education of Argentine sexologists or that the Swedish International Development Agency trained Argentine sex educators.

How Argentina’s destape was part of a broader pattern of postauthoritarian cultures around the world is, at this stage, difficult to conclude because historians of modern democratic transitions have not paid much attention to sexuality. In the case of Latin America, for example, there is no book-length study on the subject. That question also requires a consideration: not all authoritarian regimes are sexually repressive in the same way and for the same reasons, and sexual repression under authoritarian regimes might be focused on certain targets and objects rather than being all-encompassing. Dagmar Herzog has shown, for example, that Nazism intensified some sexual liberalizing tendencies for “healthy Aryan” heterosexuals underway since the early twentieth century that coexisted with virulent racism, homophobia, and mass murder.

3. You note in the article that while the explosion of sexual content that came with the destape was primarily seen as part of a democratic awakening, there were those who viewed the phenomenon critically, primarily progressive feminist activists and conservative Catholic figures. How is the destape viewed in Argentina today? Are their particular reasons why it is viewed thus today?

The 1980s media destape is seen today more critically. Although the Argentine media is heavily sexualized and women’s bodies are still objectified, some aspects of the 1980s destape have been openly condemned, especially humor based on violence against women. It is interesting that many of its own protagonists have reflected on the destape too. In the last few years, for example, models and actresses who were iconic chicas del destape have discussed publicly their role in propagating an image of women as sexual objects. They have also argued that now they can be critical about this because they have the language and the arguments to do it, while women’s sexual objectification was “naturalized” in the 1980s. The me-too movement and fundamentally the Argentine movement Ni una menos, against violence against women, have been crucial in bringing attention to these issues and changing the terms of the public debate.

4. In your article bio, you mention that your next book project is a history of sexuality in 1980s Argentina that examines the transformation of sexual ideologies and sexual practices that took place with the return to democracy. How does your HAHR article fit into this broader project?

The HAHR article analyzes the destape as a media phenomenon, while the book, Destape: Sex, Democracy, and Freedom in Postdictatorial Argentina, approaches it as a deeper process of change in sexual ideologies and practices. By examining the boom of sex therapy and sexology, the fight for the introduction of sex education at schools, the expansion of family planning services and the rise of organizations dedicated to sexual health care, and the centrality of discussions on sexuality in feminist and gay organizations, which reawakened with the return to democracy, the broader project shows that the destape was a profound transformation of the way Argentines talked, understood, and experienced sexuality. While Argentines have commonly used destape as a term to refer exclusively to the new, abundant, and explicit sexual content in the media, I propose a reconceptualization that includes mass media commodities but goes beyond. There was a destape in films, the press, television, advertising, theater, and literature, but there was also a women’s destape, a destape of feminist, gay, and lesbian activists, and a destape led by sexologists, sex educators, and sexual health experts. They represented distinctive positions, had differing goals, and engaged with and benefited from democracy and freedom differently, but together these destapes took the lid off Argentine sexuality.