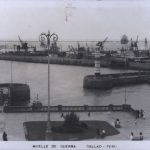 Joshua Savala is visiting assistant professor in the Department of History at Rollins College. He received his PhD in history from Cornell University in 2019. He is working on a book manuscript that examines cooperation, solidarity, and connections between Peruvians and Chileans in the nineteenth and twentieth centuries. You can read his article “Ports of Transnational Labor Organizing: Anarchism along the Peruvian-Chilean Littoral, 1916–1928” in HAHR 99.3.

1. How did you come to research anarchism along the Peruvian-Chilean littoral?

I have been interested in Peru and Chile for quite some time: as an undergraduate I did a summer abroad in Cuzco, Peru and a semester in Concepción, Chile. For my MA, I studied and wrote mostly about Chile, but I knew that for the dissertation I would want to do something on both countries.

The War of the Pacific and its legacy—in the form of political disputes, jokes, struggles over cultural items—was something that caught my attention after spending time in Peru and Chile. Indeed, I think it would catch just about anybody’s attention. But I also did not want to get caught up in the endless debates about the war itself. What was much more interesting to me than the well-documented and discussed nationalism that developed (in part) out of the war was the possibility of people who either did not care about such things or who actively organized against the nationalism of the era. Alongside this, I have always had an interest in the history of anarchism for both historiographic and political reasons. And I knew that anarchism and anarcho-syndicalism remained real options for many port and maritime workers across the first decades of the twentieth century. I put all of this together and, well, we have the article.

This piece is one portion of a larger project that delves into other categories of people. In the larger manuscript, I expand on the place of maritime and port workers, looking more closely at their laboring conditions, their lives, and the politics of masculinity and sexuality at sea and at port. Another chapter examines medical cooperation during the cholera outbreak of 1886–88 in Chile. And the last chapter centers the police and their efforts to put new criminological methods into practice at home and transnationally. The broader project, then, sticks to this idea of transnational solidarity, mutual aid, and cooperation, while bringing into the narrative a variety of other actors. 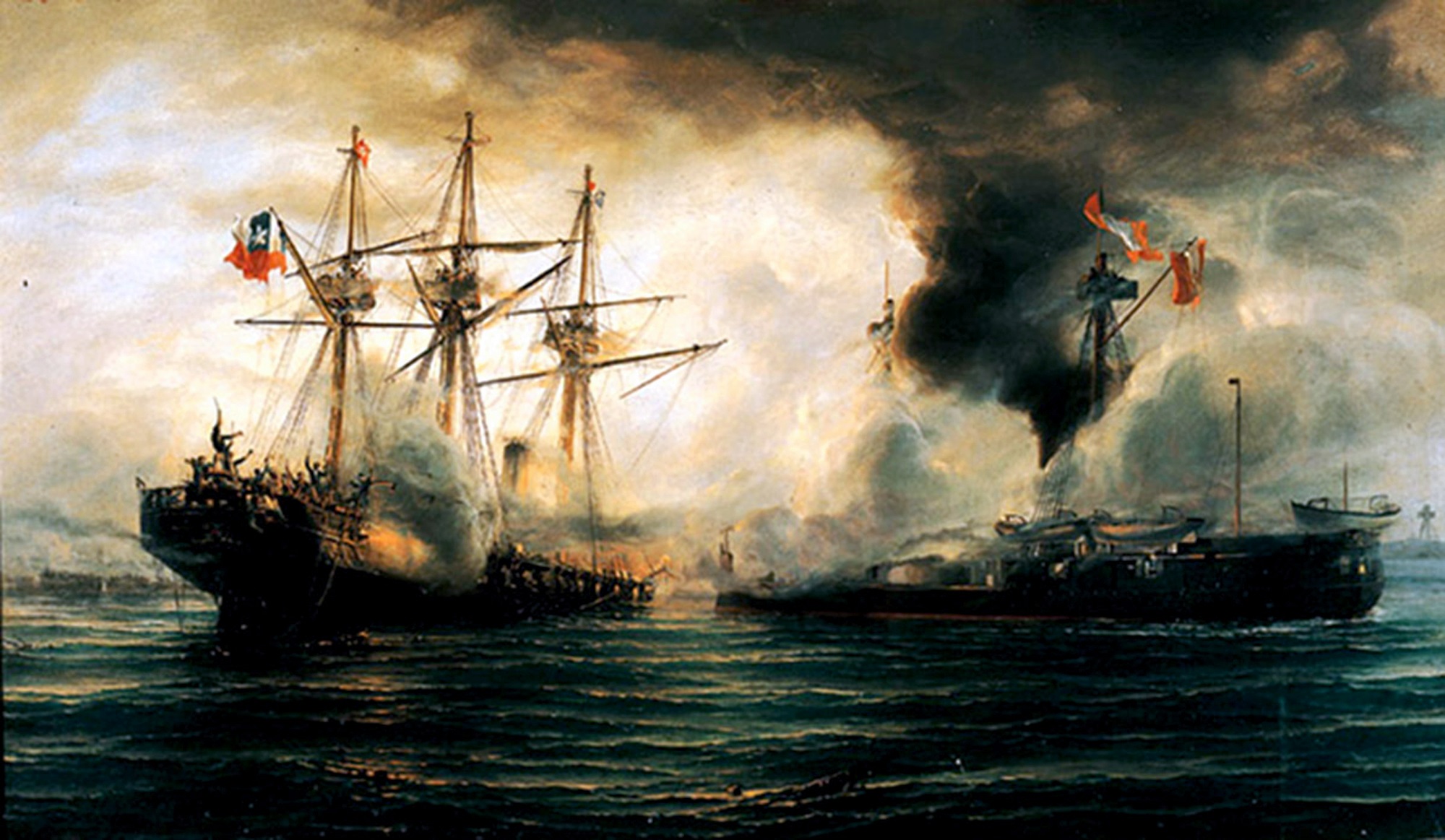 Sinking of the Esmeralda during the Battle of Iquique, during the War of the Pacific. Public domain.

2. What archival challenges did you face in reconstructing the story of transnational labor organizing discussed in your article?

As anyone who has done research in multiple countries can surely confirm, one of the challenges is dealing with different archival practices—historically and today—in each country. What I mean by this is what types of materials each state collected and archived, the conditions of those materials, and accessing those documents. In Chile, the Archivo Nacional de la Administración and Archivo Nacional Histórico (both in Santiago) have generous open hours, are well organized, and allow you to take pictures of documents. I had plenty of time in Santiago and took notes on everything I took pictures of while there, but having pictures allowed me to take shortened notes and return to the images later. In contrast, the Archivo Regional de Arequipa has much shorter open hours, pictures cost more or less 50 cents each (which meant lots of full text transcribing or very detailed notes), and when I was there, I was told they did not have a catalog of their materials. I do not write this as a critique of the ARA; I am sure they have budgetary concerns that limit the possibilities of what they can or cannot do, and the people working there are doing a great job with what they have. Rather, it is so say that doing research there is a much different experience when compared to my experience in Santiago.

Perhaps more than this, though, tracking people and their ideas was certainly difficult at moments. Sometimes these people wanted to show their transnational movements and the spreading of their ideas. At other points they most likely wanted to hide some of their efforts. This certainly makes things a little more difficult, but researching and writing history almost always runs up against that challenge.

3. How do the compelling stories traced in your article shape our understanding of the broader history of anarchism in Latin America?

In a sense, one of the things I would like to do with my work is a call back to earlier labor histories. When I first read Peter Blanchard’s Origins of the Peruvian Labor Movement (1982) and Peter DeShazo’s Urban Workers and Labor Unions in Chile (1983), I couldn’t help but be drawn in by the density of research and the closeness to the movements displayed in both works. Still, these are works of their era, and we have moved in different—and fruitful—directions since then. The effort, then, is not to ignore recent studies of anarchism but to blend them with an eye explicitly toward labor history. One of the other things within the study of anarchism today is a concern over directionality—in other words, what is the origin of anarchism? I wanted to avoid the diffusionist narrative, whether that be from a European center or from central Chile. 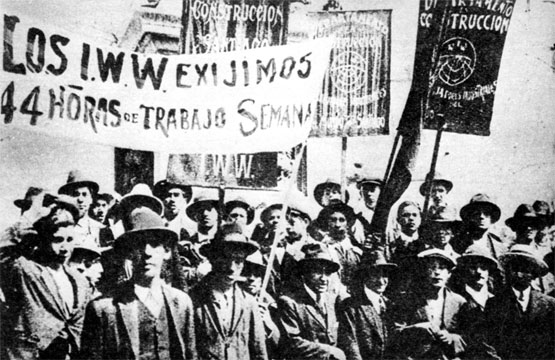 4. Your article fruitfully engages with the growing literature on transnational history. Would you mind expanding on the challenges and rewards of a transnational approach to history?

Some of the challenges are discussed in terms of the archival materials above. Beyond those issues, the transnational turn, while helpful in thinking past the nation as sole analytical category, brings with it concerns over dismissing the nation as a whole. When we are researching and writing about anarchists, clearly many of them sought to organize transnationally, to reach past state borders and take part in a politics that envisioned a radical reorganizing of the world that would do away with borders. This should not be dismissed. But they were also intensely concerned with national politics and labor laws. The transnational turn, then, must not allow the following of these people across borders as evidence of the necessity to ignore the state. This is why in the article I try to push a dual transnational and comparative approach, to combine scales of analysis. How effective I am at that, well, I will leave that to the readers.

One of the other challenges to transnational history is simply the vast literatures one must read. Studying one place is hard enough, but then to dig deeply into another country, to read and digest the debates structuring the historiography in both places, that is a difficult task. The reward of such a venture, though, is pulling together debates and strands of the literature that rarely, if ever, speak to one another. Heidi Tinsman’s recent article in HAHR points this out and works through it in quite productive ways. And sometimes this builds into something much bigger. One of the things that I hint at in the article is the need to take seriously the Pacific world when thinking about Latin America. All too often the Atlantic is the paradigm of choice, almost a given. The Latin American Pacific has been largely overlooked. But thankfully in the past decade or so, we are beginning to see a number of new works that speak to the role of the Pacific. This shift in geography and analytical perspective, I would say, comes in large part from the transnational perspective—a perspective that influenced the building of the Atlantic world paradigm as well.

5. What lessons, if any, do the stories of labor organizing traced in your article have for our contemporary moment?

While at Cornell I was involved with the graduate student movement for unionization, and years before that I worked as an organizer with AFSCME Local 3299 in California. Plenty of people have much more organizing experience than me. But one of the things that has struck me in the experience at Cornell, AFSCME, and in the research for the article, is the need to think strategically about labor politics. What I mean by that is knowing the when and how to make a move—which, I should say, is not a terribly new perspective at all. Just as obvious, I would say, is the need to think about organizing through multiple scales. But most important is simply the need to organize, organize, and organize.

This response is going to be relatively restrained since much of what I have been reading over the past five months has been toward teaching my first full load of classes. This summer I went back and reread (for the first time in English) Pedro Lemebel’s My Tender Matador and (for the first time) Roberto Bolaño’s Distant Star. I am teaching a class on Chile in the 1970s, and I knew I wanted to bring in a novel. I was first introduced to Bolaño by my Spanish professor at UC Davis back in the day (Claudia Darrigrandi), and he has been one of my favorite writers since then. But the Lemebel’s My Tender Matador was simply too spectacular not to assign to my students. Lemebel brings together so many of the topics we cover in the class, and I am excited to see how students interact with the book.

This past week, in an upper division class, we finished Myrna I. Santiago’s The Ecology of Oil. I had read the book a few years back and remember enjoying it. But this time around I read much slower—I assigned it over 2.5 weeks. What a book! I would be happy to reread it right now. Impressive archival research, lucid writing, and a masterful way of discussing labor, the environment, race, and an attention to the state in its varied forms.