Interview with Catherine Burdick, author of “Paradise and Perdition: Jesuit Visions of Santiago, Chile, before and after the Earthquake of 1647” 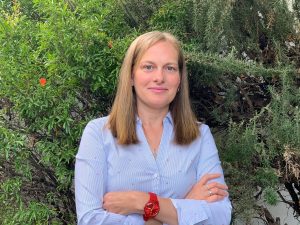 Catherine Burdick is an assistant professor of art history at the Centro de Investigación en Artes y Humanidades, Facultad de Artes, Universidad Mayor, Chile, specializing in colonial Latin American art. Her current research on paintings and cartography of colonial Chile integrates visual studies, political and religious histories, and sensorial studies in order to demonstrate the critical role of artistic expression in colonial Andean culture. You can read her article “Paradise and Perdition: Jesuit Visions of Santiago, Chile, before and after the Earthquake of 1647” in HAHR 99.4.

1. How did you come to focus on seventeenth-century Chile as an area of research?

My interest in seventeenth-century Chile grew out of a fascination for the cartography published in Alonso de Ovalle’s Histórica relación of 1646. I found that Ovalle’s maps of Chile and Santiago have not been studied in sufficient depth, and I wanted to carry out a study of these documents through a multidisciplinary approach that included a close reading of his textual sources. I am particularly interested in how these maps supported Ovalle’s role as an ambassador for his homeland in Europe and am astounded at the energies he invested in carefully describing and promoting Chile abroad.

2. You mention that the earthquake at the center of your article also destroyed many of the archival materials held by early Santiago. What challenges did this pose to your research, if any, and how did you overcome these?

It is true that our knowledge of Santiago for the first half of the seventeenth century is fragmentary due to the loss of many archives in 1647. For this period, it was difficult to attain a clear picture of the city, its population, its architectural structures, and even its central Plaza de Armas. In an effort to overcome these challenges it was necessary to seek out archival materials in collections outside Chile, and it is no coincidence that the primary materials I worked with for this study were produced abroad. Yet some archival materials, including inventories of bienes (belongings), are currently accessible in Santiago, and it was here that I was able to best recover something of the midcentury habits of elite dress.

3. How does a focus on early Santiago affect our broader understanding of urban history, in Latin America and globally?

I find that a focus on early Santiago helps us to better understand the consequences of Spain’s inability to maintain direct relations with remote regions of its empire. For its geographic isolation Santiago has always been a peripheral Latin American center, and its place in the colonial era as the most remote American capital in relation to Spain meant that it was difficult to monitor and was not developed economically. Our understanding of colonial urban history for Latin America and the world is broadened by this unusually insular case, as here we can gain a better sense of the impact of slow rates of immigration and information exchange on a city. A primary lesson that I draw from my research is that early Santiago was not only passively isolated from but also actively protected against the ongoing barrage of external influences that have shaped most capitals in Latin America and throughout the world.

4. Key to your article is Alonso de Ovalle’s early depiction of Santiago, the Prospectiva y planta de la ciudad de Santiago. What benefits and challenges are posed by using such visual sources in historical scholarship?

As an art historian I find visual resources to be powerful tools for conveying the entire “sense” of a place or thing and for expressing cultural ideas that are difficult to articulate in words. For this reason, I find maps to be ideal sources for approaching the study of urban history and culture. Of course, images also present challenges, not least of which is our expectation that they are natural representations of their subjects. In this line, one obstacle posed by Ovalle’s map of Santiago is the limitation of his own memory, and while present-day commentators have criticized the “imprecision” of his maps, we should remember that they were composed far from the places they show.

For anyone interested in the art and culture of colonial Santiago, I highly recommend the recently published book on perfumed ceramics by Isabel Cruz de Amenábar, Alexandrine de la Taille-Trétinville, and Alejandra Fuentes González, titled Cerámica perfumada de las Clarisas: Desde Chile hacia el mundo. Here, the authors present new information from the archives maintained by the Poor Clares to reveal how, since the colonial era, these cloistered nuns have created and disseminated their vibrant aromatic vessels. My favorite findings in this book are the lively colonial-era sketches of perfumed ceramics bursting with flowers and animals, as if each vessel was conceptualized as a miniature landscape.