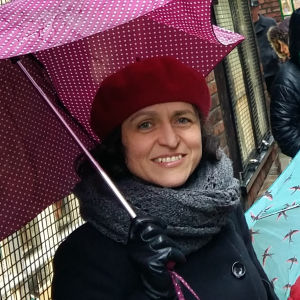 Ariadna Acevedo-Rodrigo is associate professor of history at the Centro de Investigación y de Estudios Avanzados del Instituto Politécnico Nacional in Mexico City and specializes in the intersections between education and politics. She is coeditor of Ciudadanos inesperados: Espacios de formación de la ciudadanía ayer y hoy (El Colegio de México, 2012) and Beyond Alterity: Destabilizing the Indigenous Other in Mexico (University of Arizona Press, 2018). You can read her article “Paying for Progress: School Taxes, Municipal Government, and Liberal State Building, Cuetzalan and Huehuetla, Mexico, 1876–1930” in HAHR 99.4.

1. How did you come to research liberal state building in nineteenth- and twentieth-century Mexico?

I did my first degree in politics and sociology in Madrid. After studying theories of authoritarianism and democratization and historical sociology (Barrington Moore Jr., Theda Skocpol, Charles Tilly, Michael Mann), and having been born and grown up in Mexico, I got increasingly interested in the history of the Mexican state. For my MA and PhD dissertations at the University of Warwick (UK), I focused on the Puebla Sierra, which had strong support for liberalism and where the 1910 revolution was a phenomenon that came mostly from outside. For this reason I began to question the fact that state building there after 1917 was described as “postrevolutionary,” with the implication that there had been a big rupture before and after the revolution. I wanted to find out the legacies of liberalism in this region. Given violence and cacique rule after 1910, it was not immediately obvious that there was a significant legacy. I wanted to know what exactly had thwarted the opportunities for greater equality and inclusion brought about by the liberal institutions forged in the second half of the nineteenth century, and what had prevailed. Schools and taxation seemed good topics by which to explore these problems. Work on schools by Elsie Rockwell, Mary Kay Vaughan, and Alicia Civera, and on fiscal history by Luis Aboites (all of whom eventually became good friends), further encouraged me to pursue this path.

2. Why did you choose to focus your article specifically on the Puebla Sierra? What is unique or typical of this region compared to Mexico as a whole?

My formal introduction to Mexican historiography happened as a graduate student in the UK. At the time, in Mexico and abroad, a lot of the historiography on Mexico was regional history. Luis González y Gónzalez’s microhistory of San José de Gracia inspired us all. I focused on the Puebla Sierra for various reasons. I found the beauty of the Sierra Madre, which I previously only knew as a line of triangles in poorly drawn school maps, together with the existence of archives an attractive combination. Intellectually, I was intrigued by the fact that a region that has continuously been identified as indigenous was also crucial in the mid-nineteenth-century liberal struggles (as had been argued by patriotic history for a long time, and as Guy Thomson, who became my supervisor, had thoroughly demonstrated by 1999). Until then, I had mostly swallowed up uncritically the sociological dichotomy liberal=modern; indigenous=tradition. Having been schooled in Mexico, I was also skeptical of patriotic history (and deeply bored of the cult of don Benito Juárez), so it took me a while (and the reading of non-Mexican historians) to take “popular liberalism” seriously. Now I find don Benito a fascinating figure. As for the Puebla Sierra, eventually I understood that its economic conditions, including practical difficulties for large-scale agriculture, together with remarkable hard work from the population and their leaders, made possible the implementation of some of the emancipatory promises of nineteenth-century liberalism, with real, concrete effects. In other words, liberalism at the time could show a kinder face, and some aspects of political liberalism could bring greater equality (with limits), if economic relations were not wildly unequal to start with. In this respect, the Puebla Sierra is similar to the Sierra Juárez of Oaxaca and is very different from the much more unequal states of Chiapas and Yucatan.

3. How does a focus on indigenous engagement with local taxation and school funding shift our contemporary understanding of liberalism, if at all?

Currently, liberalism is once more in crisis. It is a good time to recognize and reconsider our assumptions of what liberalism is about. In the last two decades, historians of the 1750–1850 period, and a few of the 1850–1910 period, have shown how liberalism was not an idea out of place in Mexico, not even in indigenous regions, given certain conditions. However, many historians of the 1850–1940 period still see liberalism as a doctrine that necessarily excludes indigenous peoples and peasant communities. The cases of the Puebla Sierra and the Sierra Juárez of Oaxaca show that some forms of inclusion were possible. We need to understand liberalism as a contingent and constantly changing historical phenomenon rather than as a fixed doctrine or ideal type that is then used as a rule to measure reality. For this purpose, political and social historians should engage more with conceptual history, or with what Argentine historian José Elías Palti has called a “history of political languages.”

4. What particular archival challenges did you face in tracing the relationship between the majority indigenous population of the Puebla Sierra and the Mexican state from 1876 to 1930?

The state of Puebla’s executive archive was allegedly sold to a paper factory in the 1940s. This took some of us to municipal archives, which have never had sustained and systematic institutional support but have benefited from the almost heroic individual efforts of many people who love history. In my article I thank Pilar Pacheco, who was in charge of the state archive for a long time and traveled throughout the state to rescue many municipal archives, including that of Huehuetla. For several decades, Emma Gutiérrez singlehandedly looked after the municipal archive of Cuetzalan, often devoting personal resources to keep it open and in good condition. In the pueblo of San Miguel Tzinacapan, a fertile popular education project that started in the 1970s, at the initiative of María Eugenia Sánchez amongst others, resulted in an inspiring mobilization of Migueleños, who managed to put together many beneficial cultural and social projects, including the preservation of the pueblo archive. In Zacatlán, Pilar Cuevas, a Puebla University history graduate, worked hard to preserve and organize the archive. We owe any historical research on the Puebla Sierra to their efforts. But if you want to hear the anecdotes, I will never forget the face of my students at Warwick University when I mentioned the time I lifted an archive box only to see it collapse, thereby setting free a torrent of “confetti” (in fact documents pulverized by termite) and letting a dead mouse fall out. Fortunately, the rest of the boxes in that pueblo had survived, and the documents in them were damaged but readable.

5. What resonances, if any, does the story of local liberalism in the Puebla Sierra have for the contemporary Mexican state?

There are no immediate connections. However, at the conceptual level I have found my engagement with this region useful because it allows us to challenge some preconceived notions about past and present Mexico. I have already mentioned the need to think beyond the twentieth-century “postrevolutionary” framework (and recognize the legacies of liberalism) and the need to question preconceived notions about liberalism and who supports it (which apply to the present too, and to the current need to acknowledge that “liberalism” and “populism” need not be diametrically opposed). Additionally, I think cases like the Puebla Sierra help us question the idea that the population labelled as “indigenous” would be necessarily opposed to liberalism. This is part of a bigger problem, namely, the still strong tendency to confine indigenous peoples to a position of resistance to modernity, of an orientalized “other.” I have explored this issue in dialogue with colleagues in History, Anthropology, and Science and Technology Studies (STS) in a recent book, coedited with Paula López Caballero, titled Beyond Alterity: Destabilizing the Indigenous Other in Mexico.

Yes, I found Timo Schaefer’s Liberalism as Utopia: The Rise and Fall of Legal Rule in Postrevolutionary Mexico, 1820–1900 very useful in that it sheds the idea that liberalism was out of place in Mexico and focuses on institutional history at the local level, without losing site of the broader picture.

I also recommend Paula López Caballero’s Indígenas de la nación. Etnografía histórica de la alteridad en México (Milpa Alta, siglos XVII–XXI), published in Mexico by Fondo de Cultura Económica. It is a thorough, engaging, and very original history of how the people of Milpa Alta have seen themselves at different points in history as “indigenous,” “descendants of the Aztecs,” and “originary peoples,” and what role anthropology and the state have played in these naming practices.

Finally, a novel about recent events (migrant children in the United States) told from the perspective of a middle-class mother and child undergoing their own crises: Valeria Luiselli’s Lost Children Archive. It is a beautifully written, deep reflection on how we document our past, our current world, our lives. It is also an imaginative, intelligent, and compassionate inquiry into the relationship between art, archives, sound, writing, and politics. Finally, it is also about the simultaneously painful and beautiful US-Mexico border. I can’t think of a better fiction to read for Mexican and Mexicanist historians.