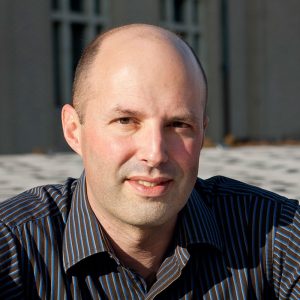 Paul K. Eiss is an associate professor of anthropology and history at Carnegie Mellon University whose research joins the methods of archival history, ethnography, and cultural analysis. His book, In the Name of El Pueblo: Place, Community, and the Politics of History in Yucatán, was published by Duke University Press in 2010. You can read his article “A Revolutionary Postmortem: Body, Memory, and History in Yucatán, Mexico, 1915–2015” in HAHR 98.4.

1. How did you come to research Salvador Alvarado and his legacy in Mexican politics?

During my graduate studies at the University of Michigan, I did a research paper on the period of the civil war and emancipation in Louisiana, with a particular focus on African American workers on sugar plantations as they made the transition—first under Union forces, and then under the Freedmen’s Bureau—out of slavery into some kind of free labor. As I made my own transition to working in Yucatán, I thought it would make sense to investigate a similar transition, from indigenous debt peonage into free labor, also during a time of transition between military and civilian rule. When I began my research in Yucatán in the early 1990s, I was struck by the degree to which the official history of the revolutionary period, whether in scholarly literature, in pamphlets sold at local bookstores, and certainly documentation produced by the Alvarado government, took the form of a hagiography of Salvador Alvarado, as the great liberator of indigenous hacienda workers. Yet when I spoke with people who lived on the ex-haciendas—many of them descendants of indigenous debt peons—I found that no one had ever heard of Alvarado. This apparent disjuncture, between official history and popular historical memory, was what led me to explore the politics of history, memory and the archives in Yucatán.

2. Your article begins in 1915, with Salvador Alvarado’s arrival in Yucatán, and ends in 2015, with the centenary celebration of this latter event. What challenges were posed by researching across such a broad time span and about events contemporary to the article’s writing?

When I first did research on this topic in ’90s, I focused very much on the copious archives of the revolutionary period and also somewhat on the postrevolutionary politics of commemoration of Alvarado as liberator, chiefly on the occasion of the 50th anniversary of his arrival in 1965. At the time, I thought, wouldn’t it be nice to fast forward to 2015—two decades in the future—to see how the centennial might be commemorated? Subsequently I turned to other projects, leaving this one on the back burner for years, until about 2013, when I realized that 2015 was right around the corner! I revived the project, anticipating the approaching centennial. In the intervening years since my initial study, advances in the digitalization and text-searchability of published literature made it possible for me to conduct much more comprehensive research on the politics of historiography over the decades following Alvarado’s death. The greatest challenge was not research per se but the writing of this article—that is, of piecing together a narrative that makes sense, across such a long stretch of time, straddling different political regimes and periods.

3. Your article derives part of its conceptual framing from an Italo Calvino short story. How generally do you think that literature can contribute to the study of history?

Greatly. And not just literature. With a background in both anthropology and history, I am quite favorable to transdisciplinary modes of inquiry and writing, whether connecting different humanistic disciplines or even transacting between the humanities and the arts. I am also quite skeptical of what I consider the ideology of disciplinarity: that is, the notion that any field, including history or historiography, can or should be conceived in hermetic, self-sufficient terms. I think that sometimes the most important insights may come when we blend fields, or frames of reference. For me, Calvino’s profound questioning of the senses, in “A King Listens,” opened a very different vantage point on power and perception than I would have had if I had confined myself to the ways such issues have been broached in the historiography. Beginning with Calvino was a way to acknowledge that inspiration but also to open up for readers a very different way of conceiving of the central issues in this study.

4. Your article productively approaches the figure of Salvador Alvarado through the double meaning of corpus: as both a body of writing and a physical body. How did this conceptual dualism inflect your approach in the article?

This formulation was inspired not just by Calvino, but also by Ernst Kantorowicz’s classic study of political theology, The King’s Two Bodies, and by performance studies scholars, like Diana Taylor, who have critiqued the epistemological separation of textual (i.e., archival) and embodied modes of memory transmission. Given that separation, it struck me that the notion of “corpus” is a particularly interesting one, as it refers both to body and to text, transcending the ways we tend to separate them and suggesting the possibility of a unifying frame of analysis. In this article, the notion of corpus helped me to craft a narrative that stretched across a century of history, as I tracked the presence and growth of Alvarado’s corpus—at once physical and textual—in a variety of contexts, from the performance of political action to the construction of archives, historiography, the erection of monuments, and the enactment of political rituals.

5. In the article, you seem to suggest that the story of Salvador Alvarado’s legacy is complete: “The moment of Alvarado’s greatest presence—the 2015 centennial commemorations—was also the time of his final departure, as his challenging and contradictory project was most thoroughly domesticated, as a call for collective well-being” (p. 701). Has this changed at all with the election of Andrés Manuel López Obrador? Why or why not?

As I found over the course of my research, Alvarado and his legacy became progressively identified with the PRI, both in regional Yucatecan politics and as a mediating point of reference when state-level politicos addressed themselves to national leaders, or vice versa. So in 2015, with the PRI in power at the national level—in the figure of President Enrique Peña Nieto—and at the state level—in the figure of Governor Rolando Zapata Bello—I anticipated a perfect storm for Alvarado’s commemoration, in a very public and charged way. Nonetheless, when 2015 came, the events and initiatives relating to the centennial seemed fairly low-key—as if the PRI were just going through the motions, deliberately ignoring Alvarado’s revolutionary legacies, to present him instead as an example of managerial competency in line with the contemporary party’s neoliberal sensibilities. This led me to anticipate the future, in a sense; if this is how Alvarado was commemorated by the PRI at a high point of regional and national power and on the very centennial of Alvarado’s arrival in Yucatán, then truly the king—to recall Calvino’s story—had at last fled the castle. AMLO, to my knowledge, has made no attempt to gesture toward Alvarado; it might seem out of keeping with his populist style if he were to reclaim a figure that has come to be so closely associated with the erstwhile official party. That said, Alvarado has seemed to disappear before, only to return, and I would be happy to be proven wrong (and to write a follow-up essay for HAHR in that case). It would be possible, for instance, for AMLO—himself a southerner, notably—to find the Alvarado of Mi sueño inspiring for his own regional infrastructural utopianism, as best expressed in his ambitious and controversial plan to build a Tren Maya to stimulate economic development and tourism in Yucatán. Only time will tell.

Recently I read Luis Alberto Urrea’s The House of Broken Angels. It is epic and enjoyable! And for the third time, I reread W. G. Sebald’s The Rings of Saturn, an oneiric work—somewhere in the borderlands between narrative fiction, history and memoir—that I find endlessly fascinating.