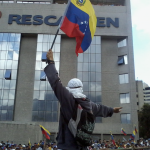 Venezuela’s ongoing political drama, popular protests, sustained humanitarian crisis, and growing diaspora have captured the world’s attention. The starkness of the current crisis contrasts markedly with what was until recently a wealthy economy buoyed by colossal oil reserves. The current political convulsions are far from singular in Venezuela’s history; the Hispanic American Historical Review has published numerous articles about popular protests throughout Latin America, including many in Venezuela’s history. Presented here are four such articles that explore different outpourings of popular protest in Venezuela against the powers that be—some violent, some peaceful, and some a complicated mixture. The authors investigate the individual conditions that provoked the contestations, often placing them within larger national and global contexts. The articles not only showcase varied local situations spaced over centuries, thus transcending the “colonial” and “modern” divide, but they also represent changing interpretations of popular protests themselves and their role in society.

Written as the social history turn was in full swing, McFarlane investigates who participated in “civil disorders” and why by focusing on lesser-known (at the time) challenges to aspects of colonial rule.

This study of two rebellions at the turn of the nineteenth century looks at the weakness of state control over distant populations and their continued expectation of autonomy.